By accepting our use of cookies, you allow us to improve your experience on our website, so that it is faster, more personalised and more secure. You can change the cookie settings in your browser at any time. Find out more about cookies.

Go back to KEYPRIVATE page

The question of how to protect capital and better still, make it work, is not new. In the ‘Merchant of Venice’, William Shakespeare explains how the merchant always spreads his goods across different ships. That way, if something were to happen to one of the ships, he wouldn’t lose all his goods in one go …

We could go back even further in time. The Jewish bible, the Talmud, states, for instance, that the best thing to do is to spread your money across gold, goods and land. If things go wrong with one of these three, losses will hopefully be compensated by the other two.

Clearly, there has been a consensus about the fact that diversification is a good idea for a long time.

The question is how to diversify. Not every asset class carries the same risks so it is probably not sensible to spread capital proportionally. Harry Markowitz and William Sharpe were the first to quantify this gut feeling. In 1990, they were both awarded the Nobel Prize in Economics for this. 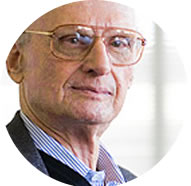 Buy the haystack, not the needle

The investment committee, advised by a respected academic panel, identified several asset classes. A cost-efficient tracker has been selected for each of these classes. Trackers are funds that track an underlying stock market index. Their advantage is that they provide an extra level of substantial diversification.

Modern Portfolio Theory allows for the optimal mix of the selected trackers to be determined as well as the ‘efficient frontier’. This ‘efficient frontier’ is the collection of portfolio constituents with a maximum return for a certain risk level. Market movements or performances of the tracker can, of course, result in a portfolio deviating from this efficient frontier. In such cases, the portfolio has to be rebalanced.

Although the model is totally sound mathematically, it also has a few disadvantages. Small fluctuations in the market can have huge consequences for the portfolio allocation and sometimes the model concentrates too much capital in one asset class.

In response to this, the Black-Litterman model was developed at Goldman Sachs in 1991. This allowed the views of analysts to also be added to the model. If there is consensus on a rising or falling market in a certain sector, the allocation will still be optimal but this consensus will now also be expressed in the portfolio.

Within KEYPRIVATE, it is the job of the investment committee to determine this consensus, based on analyses by the world’s leading equity researchers such as Amundi and BlackRock.

Go back to KEYPRIVATE page